Our debut January reading was an overwhelming success for all. The features were stellar and the open readers were incredible. G. Murray Thomas and myself, Sarah Thursday, have so many wonderful months of readings planned for you, lovers of poetry! Our next featured readers for 2nd Monday Poetry Party on February 10th, 2014, will be Daniel McGinn and Brendan Constantine! Come early to sign up for the open reading at 7pm. Located at Gatsby Books at 5535 E. Spring Street, Long Beach, CA 90808.

Daniel McGinn is a local poet with an incredible first book called 1000 Black Umbrellas. He has not only contributed poems to Cadence over the last few months, but also recorded a new version of a poem with a Long Beach twist! While finishing his MFA, Daniel has held poetry workshops supporting many emerging poets, such as JL Martindale and Zack Nelson-Lopiccolo. 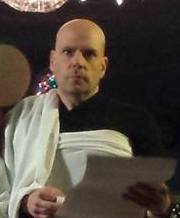 Brendan Constantine is a Southern California poet and champion for the literary arts. He teaches at the Winward School and is well known for his workshops at Venice’s Beyond Baroque. He performs his work across the United States.
His first collection, Letters To Guns, was released in February 2009 from Red Hen Press to wide acclaim. It is now taught extensively in schools throughout the Southland. His work has appeared in numerous journals, most notably Ploughshares, FIELD, Rattle, ZYZZYVA, Ninth Letter, The Pinch, ArtLife and LA Times Bestseller The Underground Guide to Los Angeles. His most recent collections are Birthday Girl With Possum (2011 Write Bloody Publishing) and Calamity Joe (2012 red Hen Press).