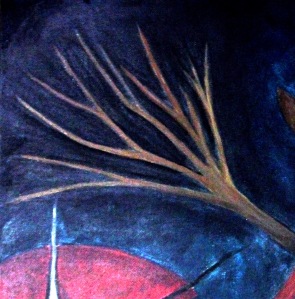 So sitting across my kitchen table is Nikola Tesla pouring some cream and sugar into his cup of coffee. I take a sip from my cup. I only take cream in my coffee. And I ask him (I know everyone wants to know, and I know it’s rude but I have to ask) what it’s like being the Steve Wozniak to that SOB Thomas Edison. He takes a sip from his cup, but it’s too hot so he pours in a little more cream. He takes another sip and smiles—perfect. Tesla looks me in the eyes – a long hard stare. I can’t take it, so I look away. Finally Tesla says in a quiet voice, “Who the hell is Steve Wozniak?” Because of course Tesla is dead, but it’s my dream. I smile. Tesla takes another sip. I look at the bottom of the cup and it says ‘property of New Yorker Hotel’. I look out the window and I see the Tesla coil sparking in the morning air (hey, it’s my dream). Tesla puts the cup down, staring quietly in the coffee, He looks up at me and smiles. “I know I’m smarter than him, and apparently smarter than Einstein, and I made him filthy rich, and that Marconi knows the radio is my invention, and knowing the truth is worth everything, but I would still love to have his money.” I smile and take a sip from my cup. “Ouch, hot, hot, hot!”