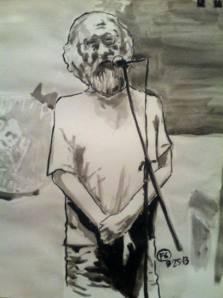 G. Murray Thomas is a head Statesman of the Long Beach Poetry Scene.  Since his arrival on the scene he has worn many hats; a publisher, open mic host, journalist, and editor of specialty themed books, such as the surfer themed, Paper Shredders, and the environmentally conscious, Polluted Poems.  He has also seen his own poetry books published, Cows on the Freeway, and My Kidney Has Just Arrived.  He is a multitalented writer, who has been freelancing writing reviews and articles for Ground Control, Poetic Diversity, and The LB Post. Thanks to Murray, we in the community have known where to find each other for years, because of his groundbreaking poetry magazines Next (News Clips & Ego Trips is a best of Compilation) and Poetix, that lists all the poetic events in Southern California monthly. Murray has ran his own poetry reading once a month (that sadly came to an end August 13th). For nearly a decade, he has always been welcoming and gracious to new and veteran poets alike, and to no surprise of Cadence Collective, he graciously sat down for this conversation.

Denise R. Weuve: Let’s start by talking about what took you all the way from Brockport, New York to Southern Californian with a pit stop in Amherst, Idaho?

G. Murray Thomas:  I went to Hampshire College, in Amherst, for a degree in Creative Writing.  I knew I wanted to be a writer in high school. And I could do that wherever I lived. So I got to choose places I really wanted to live.  After I graduated, I contemplated moving to either NYC or Southern California. California had the greater pull, primarily due to weather. And I like the beach.  I was actually on my way to California when I ended up in Idaho. I was supposed to only stay there for the winter, but stayed for six years. Idaho was an aberration.

G. Murray Thomas: Beautiful countryside. I was up in the mountains, and could walk out my front door almost directly into the woods.  I have a strong streak of nature boy in me, believe it or not.  But after six years, I decided it was time to finish the journey to So Cal. Landed in Laguna Beach.

DRW:  Certainly glad you did.  Laguna Beach is beautiful.  Cadence Collective celebrates Long Beach Poets; how would you say Long Beach, where you now reside, has influenced your writing and poet life in general?

G. Murray Thomas:  Long Beach has been a great place to be a writer. It has its ups and downs, but there has consistently been a good community of writers here.  Even in the slow times, I could always find readings to go to, and other poets to socialize with. Not to mention the fact that Long Beach is a very diverse city. There are always interesting people and cultural events to inspire one.  It’s also a lot more centrally located than south OC, so all the culture and poetry of LA itself is easily accessible. That was the original motivation for the move.  Poetry readings are my social life.

DRW: How important has socializing with other writer’s been, for your own writing? Many believe in the solitary life of the writer, sitting at a desk with maybe a computer screen as their only friend.

G. Murray Thomas: Seriously, I think interaction with other writers is vital. They can inspire, and they can let you know when you’re not meeting your potential.  Sometimes it’s overt, and sometimes it’s subtler. I pay a lot of attention to reactions when I read. And sometimes another poet will do something so brilliant, I know I need to rethink my approach.  Many of my best poems were written on the way home from a reading.

DRW: I really love what you just said about how others inspire and kind of help you know when you are not reaching your potential.  Only good friends can do such things.  But in your case, I think you exceed all potential.  I think a lot of people in the community look at you for inspiration because we (and yes, I am including myself) think you are so brilliant and non-stop.  You put many of us to shame for doing too little.  You have so many hats in the writing community: fiction writer, press founder, publisher, editor, MC, music reviewer, journalist, novelist, and poet.  If forced to choose only one to embody for the rest of your life, which would it be?

G. Murray Thomas:  Honestly, my true love is writing fiction. But it’s also the hardest for me.

DRW:  How so?  There are times when I read your poetry and I feel like I am hearing this lovely narrative that could go on for days.

G. Murray Thomas: One is idea. I can write a poem out of a single idea, or even a single image. But even a short story, let alone a novel, takes numerous ideas.  Not to mention characters, and (ugh) dialogue.  But luckily I don’t have to choose.

One of the things I’ve discovered from my writing life is that my inspiration comes in waves. I run out of poetry ideas, so I move over to fiction. Then to reviews. They feed off each other, and enable me to keep writing.

DRW:  I completely get that, particularly the characters.  However when I read My Kidney Just Arrived, I sat through like it was a novel, completing it in one sitting.

DRW: You sectioned the book into four parts and each so intricately put together like a novel. I marvel at the positive spin that touches everything you write.  In the poem “My Two Names” which seems like it could go really negative as you talk about how the ill George part of your life battles with the poet Murray part of your life.   Then, nearing the end you give the reader the lines “And every time George ponders death/Murray loves his life more.”  All that to ask: is this a conscious effort on your part, to always bring out the positive? The hope within your words?

A good bit of how that book went together just came out of the poems I was writing during those years. It was until I was putting them together that I really saw some of the recurring themes. There were a couple of poems written specifically for the book, but for the most part they were just what was on my mind.

DRW: That leads me to music and you, which has been on your mind a lot lately.  I have read quite a few of your album reviews and one that stuck out to me very recently was the Yeah Yeah Yeahs, Mosquito.  I sat there reading it and was actually amazed about how you put the titles together and made the comment about them (the band) trying to cover phobias or pull out our (listeners) fears, and then bought the album.  How does music influence not just the journalist side of your writing but your writing in general?

G. Murray Thomas: I always write with music playing. I have since high school. Part of it is, I just enjoy listening (to music) so much that I can’t spend much time without it.  But it also energizes me. It gives me something to focus on when I get stuck.  I do believe the rhythms of whatever I am listening to sneak into my writing, even though I don’t feel I write very rhythmic work.  On the other hand, once I started performing my poetry with musicians, I discovered rhythms I never realized were there.  One of the ideas I’m considering for my next reading would be to have musicians there to back up all the poets. I’ve got the musicians (or some of them) I just need the venue. And the time.

DRW: That would be amazing.  I think a beautiful mix of the mediums, instead of first we hear a poet, then a singer.  I think everyone will be onboard to help out or just be apart of that.

I’d like to end with the final five rapid-fire questions:

1.  As much as you love music, what band would you want to be a member of?

G. Murray Thomas:  Assuming I had any musical talent, I would love to work with Bowie. I think he’s a genius. And he always gets great work out of his sidemen.

DRW:   2. What writer do you constantly go back to as a reader?

G. Murray Thomas:   It used to be Fitzgerald, but a lot of his work now disappoints me. Gatsby is still brilliant.  Joan Didion when I want precision; Faulkner for the opposite.

DRW:   3. Where is your favorite place to physically sit down and write?

G. Murray Thomas:   At my desk, looking out at my backyard with its hummingbirds, bumble bees and stray cats.

DRW:  4.  What is the hardest part of being writer?

DRW:  5.  What advice would you like to leave fellow writers and readers of this article?

G. Murray Thomas:  At the risk of sounding clichéd: Write. Actually do it. But don’t forget to also live.

DRW: Amen.  Without fully living you have nothing to write about.

G. Murray Thomas, thank you so much for your time.