It’s back to school time and September’s features have some lessons to offer you! Join these two unforgettable poets, Mona Jean Cedar and Elmast Kozloyan, at Gatsby Books on September 14th. Sign ups start at 6:45 and the reading starts at 7 pm. 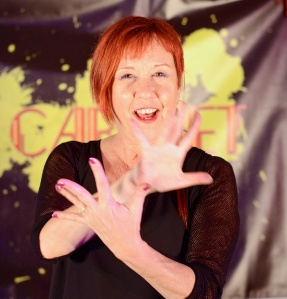 Mona Jean Cedar’s spoken word poetry is composed with American Sign Language and performed simultaneously. In 2003, Ms. Cedar was invited by Marc Smith to interpret the National Slams in Chicago and every year after up until the present.  Pilote Le Hot invited her to the World Cup in Paris in 2007 where she interpreted his international slams every year until she actually represented the United States in their Coupe du Monde de Poesie in 2011. 2015 saw her interpreting for the first time at The Women of the World Poetry Slam in Albuquerque, NM.  She has danced professionally, is a Certified American Sign Language Interpreter and Pilates Instructor, attended the Julliard School in New York City for Theatrical Interpreting, received a scholarship to the National Theater of the Deaf , is founder and director of ASL Cabaret, and presently performs with her husband, a circuit bender (google it ).

Elmast Kozloyan is a poet trapped in limbo between magic and reality (though seldom chooses the latter). At the age of fifteen won a silver medal for poetry in the Scholastic Art and Writing Awards and since then has been mentoring youth poets, is an editor of CSULA’s Statement Magazine and published in places such as Cadence Collective, Poetry in Motion, Pacific Review,  East Jasmine Review, and the Los Angeles Times. She also has a chapbook called Doe Eyed Venus.