August is heating up! The next 2nd Mondays Poetry Party is also raising the temperature with two fantastic features, Steve Ramirez and Clifton Snider. Reading starts at 7 pm and sign ups for the open reading list start at 6:45 pm. Join us at Gatsby Books at 5535 E. Spring St. in Long Beach! 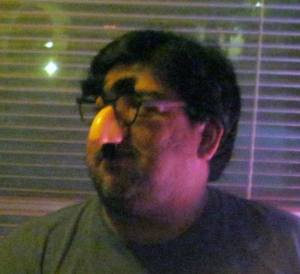 Steve Ramirez hosts the weekly reading series, Two Idiots Peddling Poetry. A former member of the Laguna Beach Slam Team, he’s also a former organizer of the Orange County Poetry Festival and former member of the Five Penny Poets in Huntington Beach. He used to be a lot of things, including polite. Publication credits include Pearl, Crate, Aim for the Head (a zombie anthology) and Incidental Buildings & MultiVerse (a superhero anthology).

Clifton Snider, faculty emeritus at Cal State University Long Beach, is the internationally celebrated author of ten books of poetry. A career retrospective of his work, Moonman: New and Selected Poems, was published to great acclaim by World Parade Books (2012). New from Spout Hill Press is his novel, The Plymouth Papers. A Jungian/Queer literary critic, his book, The Stuff That Dreams Are Made On, was published in 1991, and he has published hundreds of poems, fiction, reviews, and articles internationally. Among the publications his work has appeared in are Rolling Stone, Blue Mesa Review, Chiron Review, Pearl, The Advocate, and The South Dakota Review. His work has been translated into Arabic, French, Spanish, and Russian. Among his honors are residence fellowships to Yaddo (Saratoga Springs, NY), the Karolyi Foundation (Vence, France), and the Helene Wurlitzer Foundation of New Mexico (Taos, NM).