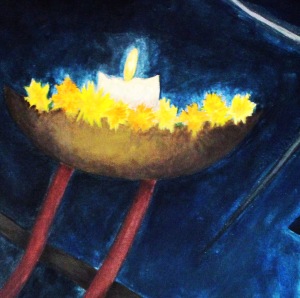 It’s true. That guy at the V Room was “flirting”,
but not like that girl on Halloween
in West Hollywood.

She was cute, and laying it on as thick
as her mascara. Batting eyelashes,
crooked smirks left and right.

I complimented her fingernails, sharpened
like arrowheads and painted black. She looked at mine
disappointed, told me no more biting.

She took off my mask, whispered
incoherently into my ear, rustled my hair.
She smelled like cotton candy and vodka.

She held my hand through the night,
danced with me to the terrible club music,
bossed me around the crowd.

She dragged me into conversations with other
strangers, told me about her service in the army,
laughed at my stupid jokes.

She admired the two scars on my bottom lip
where piercings used to be, made me ditch my friend
to walk her to the bathroom, told me she wanted to kiss me.

She asked me for my number. She even gave me
a business card, though it seems to have nothing to do with her now.
Pretty sure her name wasn’t Oscar.

Still, I liked it. And I told her I was going to be right back
when I left her by the drag queen dressed as Cleopatra,
and went to buy another overpriced drink at the bar.

I know I’ll never hear from her again. Wasn’t sure I
wanted to. Then this Thursday came, and I can’t explain why,
but I kissed the most rancid guy at the V Room.

It’s true. I was drunk. I was seven shots of tequila ($3 special)
and four rum and cokes in to the night, but he never even tried
to impress me. He just said I had a nice hat.