We are still reeling from February’s double feature of love, but there is no time to recover! We have an extra special treat for you in March! Two sets of dual features, Kevin Patrick Sullivan and Patti Sullivan, as well as Graham Smith and special guest, Amber Douglas, will be reading for you on March 9th, at Gatsby Books. Sign ups begin at 6:45 and the reading begins at 7 pm. See you there!

Kevin Patrick Sullivan’s books include, First Sight, The Space Between Things, and Under Such Brilliance. His poems appear in such journals as ASKEW, SOLO, CAFÉ SOLO, Hummingbird  and several anthologies including most recently THE SECOND GENESIS, An Anthology of Contemporary World Poetry, published in India and on the web at OTHER VOICES INTERNATIONAL and YOU-TUBE.

Patti Sullivan has two books of poems, For the Day, DeerTree Press and Not Fade Away,
Finishing Line Press. Other publications include Solo Novo, Lummox, Askew, Women’s Press,
If & When, ARTLIFE, Solo Café and forthcoming in Miramar and the anthology
Raising Lilly Ledbetter: Women Poets Occupy the Workspace, Lost Horse Press 2015. 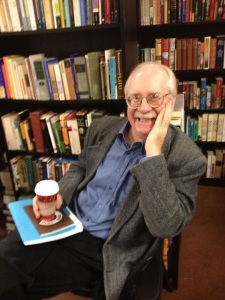 Graham Smith is an ancient rhymer whose history is shrouded in the mists of time.  he may have moved to long beach under the cover of a marine layer. allegedly a former lawyer, he has an affinity for brief poetry. he and his stout companions have been known to frequent coastal taverns, where he sometimes writes three line poems on bar napkins. Check out his website: Napkins In A Shoebox

Amber Douglas is a Mother, Wife, Poet, and Musician, who is living the dream in Huntington Beach, CA after an eventful life journey.  She has been a featured poet at various locales in Southern California, and her self-published chap book ‘Non-Sequitor’ was well received by those lucky enough to obtain a copy.  Amber holds a BA in psychology from TLU and a BS in recreation & leisure studies from UNT.  She is currently employed as a Recreation Therapist where she helps enhance the lives of special needs patients in the Orange County area. While not working or writing, Amber is a true water-woman, enjoying surfing, standup paddle boarding, and open ocean swims.