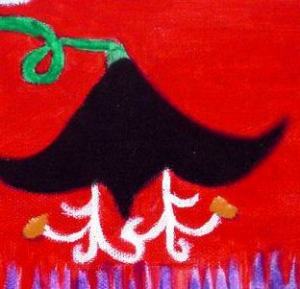 Late Thursday night my mother dragged my brother and me two duplexes back to Alice Stagg’s apartment. I pretended we were traveling gypsies. Tied a towel around my waist, and danced to the banging at the front door. My mother hid in the kitchen as your demands to be let in became campfire songs your gypsy daughter stomped in rhythm with. Your begging for forgiveness became a chant, a curse, a hex my mother feared. She hid her gypsy children, Jenischen, in shadow filled corner of a bedroom from you, and the Swiss. The Swiss wanted to eliminate the gypsies by stealing their children, and giving them to wholesome families. At least then, the children would have a chance. All gypsies were crazy, even the German Roma gypsies—the Swiss could see that through their holes. You ignored their stereotypes of insanity, as you threw beer bottles, one after another, against the aluminum siding. I listened to them ring out their descent and shatter like a family crashing at 11pm on a Thursday evening.

Let’s be clear, father: I wanted to be an orphan.