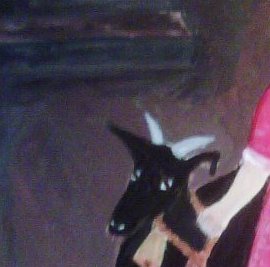 Out in the garage,
under a dirty light bulb,
I read that the part of the brain
that holds the capacity for faith
has the volume of a popcorn kernel.
This seed lights up for meditation,
for sweaty prayer, or the low uneven gurgle
of a woman who speaks in tongues and retains
nothing of her ecstatic prayer.

This idea makes sense to me
because yesterday, my father, an undertaker,
called and told me how
he’d guided two little girls to their parents’ grave
where they laid out a blanket
and four cups of tea –
two of which they eventually poured
across the dead grass
just below the headstone.

With my eyes closed,
the phone humming against the side of my face,
I think that I feel that knot of cells
flaring to life in the salty nebula of my grey matter,
like a searchlight piercing the water
to find a destroyed car with two parents,
but no little girls.

Maybe this clump of cells is like a signal flare
clawing at the sky in bursts of yellow and red
before falling back to earth and hissing out.
But possibly this knot is nothing more
than an exposed light bulb hanging in a garage,
collecting dirt and the cooked skeletons of moths
until the wire inside snaps
under the strain of constant illumination.