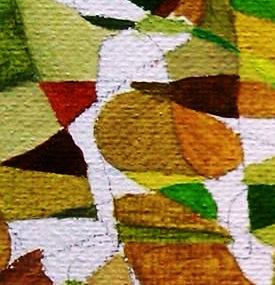 I left a shred of skin on the inside of my wrecked car, the windshield scraping off the frill of my knuckle like a chef’s knife separating a piece of dough. The tatter of knuckle skin hung there like frayed gauze, the limp, discarded flag of a ghost ship. It lost its vitality while I watched, changing from watercolor pink into a kind of mummified grey, severed from the blood and heat of my hand. Uprooted and dying with the slow regularity of a puddle growing stagnant.

The Jetta had rolled four times in the rain, gaining its tires and losing them again like a wounded animal who is not quite yet dead. Although I saw the ground rushing up from above, although a rock wedged into the open door and yanked a handful of hair from my skull, I had not been hurt until I brushed the inside of the windshield.

Now fluttering from the limp sheet of safety glass that droops inward above the steering column, is this veteran patch of my skin. Skin from the same knuckle that broke Brian Haster’s nose with the sharp sudden motion of someone splitting firewood. The same knuckle that has brushed the insides of parted thighs and sometimes moved deeper, sending incomplete and mysterious messages from beneath skirts and pant legs. This same wrinkled thimbleful of finger that moves along the gentle lunar incline of my girlfriend’s face in the dark.

This overlooked piece of myself is hanging from a shard of glass the size of a carpenter nail, finishing the parched business of dying, and I am regretful. This knuckle that has brushed away tears, has been cured like leather in paint chips and motor oil. Now it will be replaced by something smoother, by the pink skin of new growth that cannot entirely be trusted, skin that I will have to build from scratch, that may not turn out as well.

And somewhere on the side of the freeway is a clump of my hair, maybe dyed black, covered in transmission fluid and tar, wrapped around rocks and tied into knots by the turbulence of passing cars. I hope that a few strands have been buffeted to other places, carried by the contrails of big rigs up into the Cajon pass to rest with the ashes of my cousin, wrapped around an axle and brought up north where a blue jay will put it into her nest, tucked inside the latticework of the Golden Gate bridge.

These silly dreams are important because this skin is not going anywhere — It will be towed away with the car frame once I clean out my possessions. A secret bit of humanity tucked into the crushed hulk such places make of cars — hidden away inside the wreck we make of the world