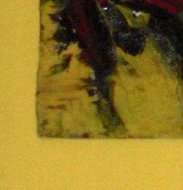 In creation myths,
the earth is grown from a glop of ground
brought up from underwater.
Sometimes it’s a turtle or toad that emerges,
a seed hatching from his dirt-stained head,
sometimes the gods do it,
presumably out of bored curiosity.

I like it best when it is a bird who dives deep,
flapping wings used as fins,
eyes darting,
wildly out of its element.
And when the raven,
(it must have been—
could only have been the raven)
bursts forth from the water
with a triumphant caw,
and the bit of runny, mossy mud in its beak
fell and immediately began to expand in the sudden
liquid gold light of the sun,
was the Ocean jealous?

Did it resent this newcomer’s intrusion?
Or did it recognize the land as simply another part of itself
brought forth to the light,
remember the depths from which change must come,
and then embrace the baby Pangaea
on every side,
kissing her sandy forehead with each curling wave—
and in doing so did not the Sea
also cause itself to rise?