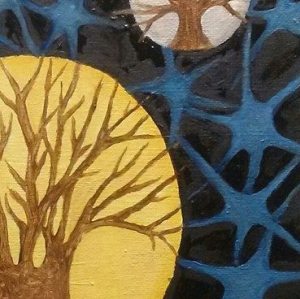 How could they break rank so thoughtlessly?
Unruly stalks of hair spiking from ear lobe,
garrulous vines reaching out of the nostril,
mingling with the legitimate sprigs above the lip.
Where once there was a uniform row of
corporal spears lining at ease above the brow,
they now seem to flee in diasporas of sprouts,
taking root in the ruts and fissures of my face.
No way to stop the rebels, cut one down
and ten replace it. In days of violent
and abrupt change, I can see that tactics must change
in order to deal with an altered demography.
Warfare must give way to diplomacy,
new alliances must evolve; groom with compassion,
root out only the worst offenders;
the obstreperous curl, the prickly sprout on top
of a mole. Let everything else be welcomed
to flourish in barren terrain.
This, I suppose, is what it means to
come to terms with oneself.