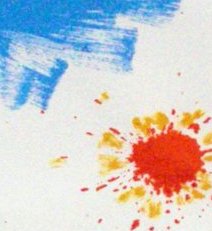 True genius was Einstein
and Edison, Beethoven and Bach.
Light bulbs and electricity. Book smarts
and Encyclopedia Britannica. Sharpened
arrowheads and spears for hunting boar.
Swords, knives, and fire. Then came static
and friction, kinetic energy and the rise
of convenience addiction. Then came loud
handheld killers made of wood and cold steel
that start with powder and a bullet and end with a bang.
Technology became 2D videogames and 8-bit colors,
pixelated graphics, and size 14 fonts typing DAS in green
on bulbous screens encased in rectangular bodies.
Then it became the World Wide Web,
which then became “cyberspace” and then became
the Internet and then became a charcoaled hole.
An ocean of digital humanity, indigeneity and indignity,
uploaded to a cloud server and never to be seen again.

The future of genius is endless bubble wrap
for robot visionaries. A fishbowl of shifty ideas that could help
what’s left of our race evolve into a product even less-human
than computerized murderous droids, faces perma- lit with bright LEDs,
and strained eyes studying dead relationships on flat screen HDTVs.
Or a series of white hot light bulbs glowing
above the chock-full foreheads of multi-cranial beings
calculating recipes and remedies for poverty, cancer, and pollution,
but not before first creating universally-terroristic warheads
capable of sinking the Moon, millions of the galaxy’s
rapidly falling stars, and even the Sun into another
dimension, where the magic of the wheel
is still the bee’s knees, and nobody
actually exists.