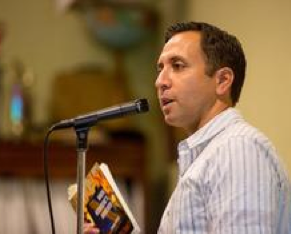 This Wednesday, February 5, 2014 at the Ugly Mug in Orange, California Daniel Romo book release for When Kerosene’s Involved takes place at 8pm.  This book is a revisioned and reissued and released by the local press, Mojave River Press.  The collection of work is over 100 pages of prose poetry, flash fiction, and crafting of words into art. Nearly six months ago Daniel sat down with me for a conversation about his poets, poetry, being an editor, and life in general.

Denise R. Weuve:  What made you start writing poetry?

Daniel Romo:  I watched Def Poetry Jam. The performing of words was something new to me. It was both exciting and vital. I became inspired to write, myself. My first poems started out as “spoken word.” From there, I started attending open mics, reading poetry, going a different route from spoken word, and here I am.

DRW:  How did you become part of the Long Beach Poetry Scene?

Daniel Romo: I went out to various open mics around town. Tuesday night was Viento y Agua. Wednesday night was Portfolio Coffeehouse. Saturday night was Shades of Africa. I befriended people at these events and have continued to keep in contact with them. I also became a regular at Murray’s reading at Barnes and Noble (now defunct). Though I’m not sure I’d categorize myself as part of the “scene.” I live in Long Beach. I write poems and sometimes read them in Long Beach. But, to me, scene implies exclusionary. And that is the last thing I want to be associated with, as a writer.

DRW: Even though you do not like the word “scene”, you are a Long Beach poet and you mentioned that many have been supportive to you, how (in a sense) do you pay that back, or continue the chain, as it were?

Daniel Romo: It’s a matter of support. I try to support them back by going to their readings, buy their books, invite them to read with me (when I had my reading at Borders). Also, simply thank them. 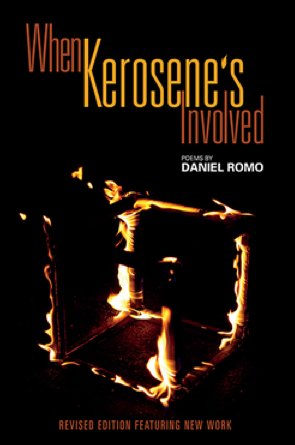 DRW: This book, When Kerosene’s Involved, is primarily prose poetry. What is the allure that prose poetry has over you?

Daniel Romo: It’s sexy-quirky-misfit-edgy-“Hey, I didn’t notice at first, but you’re pretty hot,” -sexy. I began writing prose poems three years ago, and they comprise the majority of what I write. And because of that, it’s helped make my fiction shine even more.

DRW:  What do you think is the dividing line between a prose poem and a poem (besides format)?

Daniel Romo: Could be here all day talking about that. That’s the thing, there is no line. Besides being quirky, often a pimped-out moment, non-linear, and lots of other things, it’s more of a gut thing. “Yeah, this begs to be a prose poem.”

DRW: Recently you became the prose poem editor for Cease, Cows, can you explain how this came about?

Daniel Romo:  I saw a call for a reader on Facebook. Turns out, the Founding Editor/Director (H.L. Nelson) for Cease, Cows attends the same grad school I attended. Also turns out the Managing Editor, Alisha Attella, lives in Long Beach. Cease, Cows is new, but good. I’d been following it since it debuted earlier this year. I submitted my poetry resume and they decided I was a good fit. I especially like the position because I’m solely reading prose poems. There are other journals I considered applying to be a part of, but I went for this position because it’s a fresh journal with a huge amount of momentum. We’ve even published a few members of Cadence Collective.

DRW: How far do you have to read into a poem before you know if you are going to take it or not?

Daniel Romo: By the third or fourth sentence I can tell if it’s a possibility for us or not. I often have to reject quality prose poems. Doesn’t mean they aren’t good prose poems, just means they don’t fit it with our aesthetics. At the same time, some poems sent in are in dire need of revision and are written to look like prose poems, but aren’t really prose poems.

DRW: What pulls you into a poem, and gives it a shot of publication?

Daniel Romo: I want the poem to say something deeper other than the words on the page. I want to hear the voice of the poem. I want to see the guts. I want language to be poetic. I want imagery to be vivid. I want setting to be authentic. I want surreal with purpose. I want experimental without alienation. I want quirky with intent. I want mundane without being mundane. Other than that, you know, whatever.

DRW: Besides being a writer, and editor, you are a teacher, how does teaching made you a better writer?

Daniel Romo: Inspiration. It forces me to think of cool assignments and sometimes I do them, or at least modified versions. But mainly, I get inspired from my students.

DRW: Looking at your own work recently, how have you seen it evolve in the last year, and where is it heading?

Daniel Romo: I experiment more. I’m not afraid to fail, to be less than at my best. You can’t grow, otherwise. I see myself continuing to improve upon my prose poems, to write more fiction, maybe even a novel.

I even went on omemgle and wrote collaborative poems with anonymous strangers.  I wrote a line and then they wrote and then I wrote, etc.

DRW: Let’s talk about what makes a poem great.  When do you know you have read a great poem, or written one?

Daniel Romo:  I don’t know if I’ve written a great poem. I’m too close to them, but I know when I read a great poem because I never tire of reading it, ever.

DRW: Then, name a great poem that haunts you.

Daniel Romo: I love Frank O’ Hara reading “Having a Coke with You”. I love Tony Hoagland’s “Reading Moby Dick at 30,000 Feet.” I love “In the Origami Fields” by Sabrina Orah Mark.

DRW: I am going to wrap this up with the rapid fire 5 questions.

DRW: 1. What writer do you constantly go back to as a reader?

DRW: 2. Where is your favorite place to write?

Daniel Romo: My garage.  Cheap desk out there, I bought from K-Mart, I grab my tea from Starbucks, light jazz in the background and it’s on.

DRW: 3. What is the hardest part of being writer?

DRW: 4. What advise would you like to leave fellow writers and readers of this article?

DRW:  5. And finally, you are fascinated with calling customer services and asking if poetry is dead, so Daniel Romo, is poetry dead?

Daniel Romo:  No. Poetry is not dead…